During the week of July 26th  – 30th, fieldwork in the Passeier Valley was conducted with the main goal of data collection. The collected information corresponds to soil samples and the execution of the Dynamic Cone Penetration Test (DCPT). Laboratory analysis will be carried out from the collected data to classify the soil material and extract hydrological and geotechnical parameters such as soil density, water content, hydraulic conductivity, cohesion, and friction angle, which are essential inputs for the physically-based modeling.

The fieldwork in the five days was mainly divided into two stages. The first one consisted of digging a soil pit (with dimensions of 1m x 1m x 1m) at each previously selected location to have a clean soil profile for descriptions and sampling. Out of the soil profile, two buckets of material and several ring-shaped samples for laboratory analysis were taken at different depths to have a suitable representation of the soil profile. Furthermore, the second stage involved the execution of the DCPT to determine the soil depth and have a general overview of the soil structure. All the sampling and tests were done after discussing and getting permission from the landowners.

Lastly, the fieldwork team was very grateful for the friendliness of the farmers in the Passeier valley. The conversations with them gave great detail of information on the local problems with landslides and of course, their corporation in allowing the samples to be taken from their fields, was also very thankful. 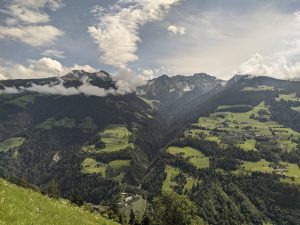 East flank of the Passeier valley. Taken from the surroundings of Vernurio.

Collection of soil in the rings for laboratory analysis.

On the 13th of July Eurac Research met with the Consiglio Nazionale delle Ricerche – Istituto di ricerca per la protezione idrogeologica (CNR IRPI). This is the research institute for geo-hydrological protection. Some of the most well-known researchers in the field of rainfall thresholds work in the latter organization. CNR IRPI was represented by Stefano Luigi Gariano, Maria Teresa Brunetti, Massimo Melillo and Silvia Peruccacci. On the Eurac side Stefan Steger, Alice Crespi, and Robin Kohrs participated. As an external researcher from the University of Jena, Jason Goetz also attended the meeting. The goal of the meeting was to present the current status of the rainfall thresholds that are developed within the Proslide Project. In addition, a mutual exchange on recent developments and recurring challenges turned out to be very beneficial. Finally, another meeting with the final results was proposed.

First, Eurac presented his work on the thresholds for South Tyrol and in doing so highlighted the issues he faced. These include common questions as the generalization vs the precision for thresholds or the frequent topic of rainfall event definition. After the presentation, the round was open for discussion and questions. With ongoing time, it became more and more evident that the input data for the threshold, and its quality, is crucially important. Not only the temporal and spatial resolution of the rainfall data or the accuracy of the landslide data are decisive for the successful development of rainfall thresholds. Rather a separation between a dedicated landslide catalog and a landslide database should be made. While the former one usually contains dedicated research on each single entry that fits the research needs, the latter one normally contains many movements of potentially different types. It then depends on the researcher to filter out those, that are of interest and fit the research questions. Furthermore, differences in the approaches to develop rainfall thresholds were reviewed. As anticipated beforehand, there is not one single best approach. Instead, there are many different methods that each have their legitimation and should be carefully examined and discussed.

The presented results were a status quo at that time. Hence, another meeting with the final results was planned for the end of this research line of the project. Also, CNR IRPI kindly provided us with an extract of their landslide catalog for the area of South Tyrol. This data is and will be used to validate models that are built using data from the IFFI database 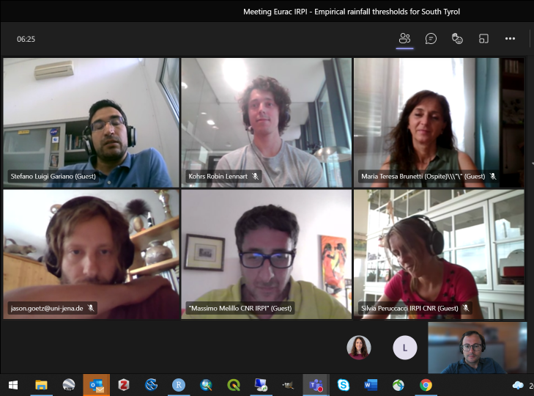