On the 13th of July Eurac Research met with the Consiglio Nazionale delle Ricerche – Istituto di ricerca per la protezione idrogeologica (CNR IRPI). This is the research institute for geo-hydrological protection. Some of the most well-known researchers in the field of rainfall thresholds work in the latter organization. CNR IRPI was represented by Stefano Luigi Gariano, Maria Teresa Brunetti, Massimo Melillo and Silvia Peruccacci. On the Eurac side Stefan Steger, Alice Crespi and Robin Kohrs participated. As external researcher from the university of Jena, Jason Goetz also attended the meeting. Goal of the meeting was to present the current status of the rainfall thresholds that are developed within the Proslide Project. In addition, a mutual exchange on recent developments and recurring challenges turned out to be very beneficial. Finally, another meeting with the final results was proposed.

First, Eurac presented his work on the thresholds for South Tyrol and in doing so highlighted the issues he faced. These include common questions as the generalization vs the precision for thresholds or the frequent topic of rainfall event definition. After the presentation the round was open for discussion and questions. With ongoing time, it became more and more evident that the input data for the threshold, and its quality, is crucially important. Not only the temporal and spatial resolution of the rainfall data or the accuracy of the landslide data are decisive for the successful development of rainfall thresholds. Rather a separation between a dedicated landslide catalog and a landslide database should be made. While the former one usually contains dedicated research on each single entry that fits the research needs, the latter one normally contains many movements of potentially different types. It then depends on the researcher to filter out those, that are of interest and fit the research questions. Furthermore, differences in the approaches to develop rainfall thresholds were reviewed. As anticipated beforehand, there is not the one single best approach. Instead there are many different methods that each have their legitimation and should be carefully examined and discussed.

The presented results were a status quo at that time. Hence, another meeting with the final results was planned for the end of this research line of the project. Also, CNR IRPI kindly provided us an extract of their landslide catalog for the area of South Tyrol. This data is and will be used to validate models that are build using data from the IFFI database 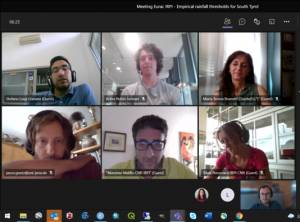